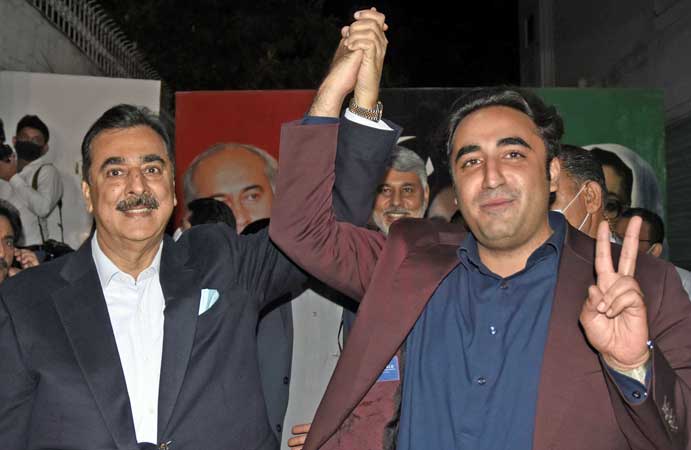 The Pakistan Democratic Movement (PDM) on Monday nominated former prime minister Yousaf Raza Gilani as its joint candidate for the upcoming election for the post of Senate chairman.

During the meeting, a special committee set up for the long march presented its recommendations for the grand anti-government demonstration. It said that long march should commence from Karachi on March 26 with a rally and all processions should reach Islamabad by 3pm on March 30. The committee recommended that all parties should mobilise as many people as possible and they should bear all expenses on their own. It also suggested that a centralised system must be created to mobilise people and to achieve it, traders, farmers and trade unions should be contacted. The committee further recommended that all arrangements should be made on the site of the sit-in prior to the arrival of the participants.

Addressing the meeting, Bilawal Bhutto said that the election for the post of Senate chairman would take place in four days. “We want to win this election as well and add another victory to our credit,” he said, and added that PPP is committed to PDM’s roadmap.

Addressing a press conference flanked by Bilawal Bhutto-Zardari and Maryam Nawaz after the meeting, PDM chief Maulana Fazlur Rehman shared some details about the alliance’s upcoming long march, saying that caravans will arrive in Islamabad by March 30. “The long march will begin from March 26. Caravans from every corner of the country will participate,” he said. “We appeal to the entire nation to play their part in ousting this illegal and unconstitutional government,” he added.

Fazl said the PDM’s caravan will arrive in Islamabad on March 30, adding that another meeting of the opposition’s leadership will be held on March 15 to discuss the protesters’ stay in the capital. “More details will be revealed about the march then,” he said.

A day earlier, Bilawal Bhutto along with other party leaders had called on Chaudhry Shujaat Hussain and Chaudhry Pervaiz Elahi at their residence in Lahore. In a news report released by state-sponsored Associated Press of Pakistan after the meeting, it was stated that the Chaudhry Brothers had refused to support PDM’s joint candidate for Senate chairman’s slot. “We are government allies and have already assured our support to the PTI-led government candidate Sadiq Sanjrani,” the APP had quoted PML-Q leadership as telling Bilawal Bhutto, while citing a statement issued by the PML-Q Media Cell. Same was reported by all TV channels as well. Reports said Yousaf Raza Gilani was not present in the meeting, however the APP had reported that the former premier also attended.

In an interesting turn of events on Monday, PML-Q leader Moonis Elahi claimed that Bilawal did not ask for PML-Q’s support for Yousaf Raza Gilani. “No such thing happened. @BBhuttoZardari did not ask for support in Senate and nor did we offer. He came to inquire about Shujat Sb’s health for which are grateful,” he posted on his Twitter handle.

Contrary to what Moonis Elahi claimed in his tweet, PML-Q leader and Federal Minister Tariq Bashir Cheema, who was also present in the Sunday’s meeting, told a private TV channel on Monday that the matter of support for the PDM candidate was discussed during the huddle. “Ch Shujaat Hussain very clearly told the visiting delegation that they respect the PPP but since PML-Q is a coalition partner of PTI-led government, it is not possible for the party to vote for PDM candidate and that a commitment has already been made with the government to support Sadiq Sanjrani for Senate top slot,” he told the TV channel.