All roads in Islamabad will be clear for traffic in a few hours. #Islamabad #CleanAndGreenPakistan
Video credit - Capt Ilyas PSP pic.twitter.com/T5OWzrMRsA

TLP ends Faizabad sit in after successful negotiations with the Govt

According to details, the talks between the government and Tehreek-e-Labaik were successful after which Tehreek announced to end the Faizabad sit-in on the issue of blasphemy. A written agreement between the two sides came to light.

According to the written agreement, the government has assured Tehreek-e-Labaik that the French ambassador will be deported within two to three months. Pakistan’s ambassador to France will not be appointed, and all French products will be boycotted at the official level. The arrested activists of Tehreek-e-Labaik will be released immediately. No case will be filed against the participants of this march later. 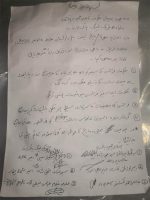