KARACHI: Members of the commentary panel for the Pakistan Super League (PSL) final dressed up  in national attire. 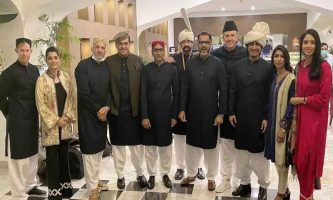 According to a Pakistan Cricket Board (PCB) spokesman, English commentator Dominic Cork wore a Jinnah cape with a shalwar kameez, while South African commentator Jonty Rhodes wore a Sindhi hat with a black and white shalwar kameez.

According to the PCB spokesperson, the culture of the four provinces has been highlighted by wearing traditional attire at the PSL finals.

Remember that the final of Pakistan Super League 2020 is being  played today between Karachi Kings and Lahore Qalandars. Both teams have reached the final of the event for the first time and are determined to win.

The match is being  played at the National Stadium in Karachi . In the play-off stage, Karachi Kings defeated Multan Sultans and made it to the final.