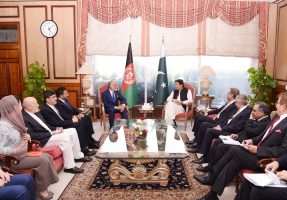 According to a statement issued from the Prime Minister’s House after the meeting, Prime Minister Imran Khan expressed his best wishes for the successful outcome of the Afghan peace process.

According to the statement, the Prime Minister said in the meeting that there is no military solution to the conflict in Afghanistan, political solution is the only way forward, I am happy that the international community has recognized our position.

The Prime Minister said that all Afghan parties must work to reduce the violence through ceasefire, Pakistan will support the agreement reached on the future of Afghanistan, Pakistan will continue to support the resumption of the Afghan conflict and economic development.

Imran Khan said that there are ample opportunities for Pak-Afghan trade, Pakistan will continue its efforts to facilitate Afghan transit trade, economic and public relations with Afghanistan will be further strengthened.

The Prime Minister said he was looking forward to visiting Afghanistan at the invitation of President Ashraf Ghani.