The hijab was made part of the police uniform to include more Muslim women in the New Zealand police.

Zina Ali, a newly recruited constable in the New Zealand Police, is the first female police officer in the country’s history to wear a hijab.

According to a police spokesman, the formal inclusion of the hijab in police uniforms is aimed at creating comprehensive services that reflect a diverse community.

According to the New Zealand Police, the decision to formally include the hijab in the uniform was made in 2018 on a request received from the police staff. 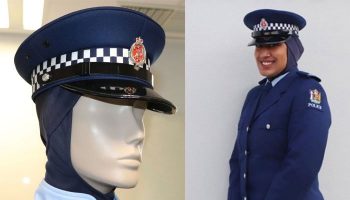 Born on the Pacific island of Fiji, Constable Zina Ali moved to New Zealand with her family as a child.

“After the assassination attempt on Christchurch, I decided to join the police department,” Zina Ali told a foreign news agency.

“I felt that more and more Muslim women needed to join the police department to help people,” she said.

According to Zina, she is proud to see the hijab formally included in the uniform, and hopes that other Muslim women will also be inspired to be part of the police.

It should be noted that before New Zealand, Metropolitan London and Scotland Police have also provided Muslim women with the option of wearing hijab in uniform.