Leading singers Momina Mustehasan and Bilal Saeed have released the second part of their song ‘Baari 2’ which has become popular among the fans.

And recently Momina Mustahsan and Bilal Saeed had announced that they will soon release a remake of the song.

Before releasing the song, the two singers did various posts about ‘Baari’ and ‘Baari 2’. Momina Mustehasan had said that the story of ‘Baari’ is actually the story of a young girl who loves despite a broken heart and gives the opportunity.

Continuing from the first part of Baari 2, it is shown that Momina Mustehasan gets angry on the basis of misunderstanding and at the end of the song, this anger ends beautifully.

The hashtag Barri2 # is also trending at number two on the social networking site Twitter. 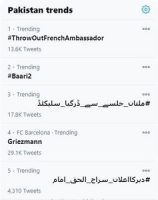