After the UAE, Bahrain also signed a peace agreement with Israel

After the United Arab Emirates, another Arab country, Bahrain, also announced the resumption of diplomatic relations with Israel.

US President Donald Trump spoke on the social networking site Twitter about the landmark agreement between Israel and Bahrain.

Donald Trump said in his tweet that “another major development has taken place today, our two great friends Israel and Bahrain have agreed on a peace agreement, Bahrain is the second Arab country to sign a peace agreement with Israel in the last 30 days.” ۔ 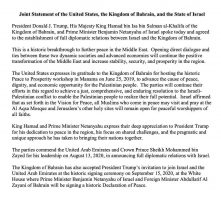 The joint statement described it as a major development and said that the establishment of diplomatic relations and the resumption of direct talks between the two countries would accelerate the process of positive change in the Middle East and bring stability, security and prosperity to the region.

The statement said that the United States welcomes this agreement and the parties will continue to work for a just, comprehensive and lasting solution to the Israeli-Palestinian conflict so that the Palestinian people can get their due.

According to the statement, Israel has assured that under the principle of peace, all Muslims who come under the purview of peace will be allowed to visit and worship at Al-Aqsa Mosque and other holy places in occupied Jerusalem. Peace will be open to believers belonging to the religion.

According to the statement, King Hamad and Netanyahu praised US President Donald Trump’s efforts to bring peace to the region. The three countries also praised the leadership of UAE Crown Prince Sheikh Mohammed bin Zayed Al Nahyan in announcing the resumption of diplomatic relations with Israel by the United Arab Emirates.

According to the statement, US President Donald Trump invited Bahrain to attend the signing ceremony of the peace agreement between Israel and the United Arab Emirates at the White House on September 15, which Bahrain accepted.

Israeli Prime Minister Benjamin Netanyahu and Bahraini Foreign Minister Abdul Latif al-Zayani will sign the peace agreement at a ceremony at the White House on September 15.