According to the News, a four-storey residential building collapsed in Allahwala Town area of ​​Karachi in which some people are feared to be buried.

Residents of the area have started rescue operations on their own after the building collapsed.

Residents say some families lived in the building and are feared buried under the rubble.

According to police sources, water had been standing at the site of the collapse for a long time. Six families are reported to be living in the collapsed building

Police Rangers and rescue teams have reached the spot after the incident.

Rescue team volunteers are also engaged in relief work and a heavy contingent of machinery has been called in by the administration. 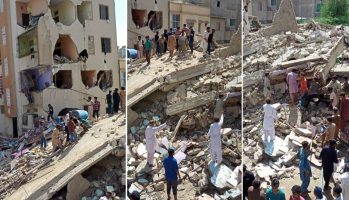 Sources said that 5 injured people have been rescued from the rubble of the building so far and they have been shifted to a nearby hospital.

According to police sources, the family of traffic police officer Zulfiqar is also living in the same house. Zulfiqar is calling his family but no one is coming in contact on the phone.

SBCA sources said that the collapsed building was not declared damaged but the cause of the collapse is being ascertained and it is also being examined whether the plan of the building was passed or not.

Sources said that water had been standing for a long time at the place where the building collapsed in Allahwala Town.